There are many ways we can arrange this holiday to make it perfect for you. Please call to discuss the options available and make the choices that are right for you.

Cardigan Bay, Mid Wales, is world renowned for scenic views and rugged coastline. This Holiday won’t disappoint anyone with a passion for walking. Making use of the Wales Coast Path, the only coastal path to stretch the entire length of a country.  The Cardigan Bay segment stretches from the wild headland of Strumble head in the south, 207 km (129 miles) to Bardsey Island off the Llyn Peninsula in the north. Split up into convenient daily walks, you can tailor your holiday to include segments to match your interests and activity levels.

This Adult Only (16+) holiday includes all the essentials for the perfect walking holiday. You can choose one of the many routes to match your walking ability. Plenty of time to explore the many towns and villages along the way. Pick from one of the routes each day and either walk from hotel to hotel (Depending on how far your route is from us) or stay in our Own Four Star B&B and we will take you to and from your chosen route. Once you have booked we will contact you to find our exactly what would make it a perfect Holiday for you.

Walkers of all abilities

Great as a gift

At Country Holidays we are always as flexible as possible. Don’t worry if this holiday doesn’t meet your exact requirements. We can tailor it for you. You will have plenty of opportunities to discuss your needs with our sales team before committing. 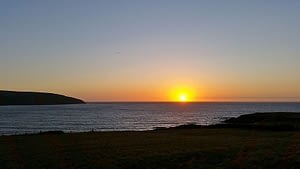 As you walk along the Coat Path you will see numerous beaches and a unique marine life including a pod of Bottle Nosed Dolphins. The towns and villages include Fishguard, New Quay, Aberaeron, Llanon, Aberystwyth, Borth, Aberdyfi, Tywyn, Barmouth, Porthmadog, Criccieth, Pwllheli, Cwmtydu, Nanternis and Llangrannog. Major rivers flowing into the bay include the Afon Glaslyn, Teifi, Rheidol, Dyfi, Aeron, Dysynni, Mawddach and Ystwyth.

Until the early 1900s, Cardigan Bay had a strong maritime industry. Cardigan is located at the mouth of the River Teifi and at the turn of the 19th century, the heyday of the port, it was a more important port than Cardiff. At this time more than 300 ships were registered at Cardigan—seven times as many as Cardiff, and three times as many as Swansea.

The central and northern areas of the Bay are the location of the legendary Cantre’r Gwaelod, the drowned “Lowland Hundred” or “Hundred under the Sea”. During the winter storms of 2014, parts of the lost ancient forest of Borth, which 4,500 years ago stretched on the boggy land to Ynyslas, reappeared on the shoreline in the form of preserved exposed tree stumps. Due to climate change and rising sea levels, the forest was buried under layers of peat, sand and saltwater.

The Cardigan Bay Special Area of Conservation was set up to preserve the natural wildlife in the area, both in the sea and on the surrounding foreshore.

From the Ceredigion Coast Path it is often possible to observe the Bay’s “Big Three” species of harbour porpoise, grey seals, and bottlenose dolphins, of which the Bay has the largest population in the UK. Other mammals, such as minke whales, Risso’s dolphins and common dolphins, together with many species of sea birds, such as puffin, and sharks, including basking sharks, can also be seen.

Since the late 1990s and early 2000s, the Bay has been invaded by spider crabs. Not a seafood normally consumed by British people, since 2010 the local fishermen have supplied the Michelin-starred restaurants of Raymond Blanc.

There are no reviews yet.

Only logged in customers who have purchased this product may leave a review.

We use cookies to improve user experience and analyse website traffic. For these reasons, we may share your site usage data with our analytics partners. By clicking “Accept Cookies,” you consent to store on your device all the technologies described in our Cookie Policy. Please note that some processing of your personal data may not require your consent, but you have a right to object to such processing. Your preferences will apply to this website only. You can change your preferences at any time by returning to this site or visit our privacy policy.  Please read our Terms and Conditions and Privacy Policy for full details.
Manage options Manage services Manage vendors Read more about these purposes
View preferences
{title} {title} {title}